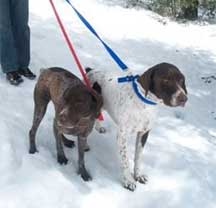 Sadie & Lightning: Together Forever
Just one week after putting out a desperate call to our supporters, Sadie & Lightning, two 7-year-old GSPs who were rescued together in another state and given up by their owners who had moved to NJ were saved! It was critical for these dogs to stay together since they had both been rescued before and bonded over the last several years. Sadie was Lightning’s protector, but a real love bug.

A shelter in their area picked up these two sweet dogs, who were abandoned by their owner. They were rescued for the last time by one of our past adopters.

In their new digs, they will join a few other lucky dogs and cats and be treated to daily dog walkers, consistent vetting and tons of love. On top of the generosity of this adopter, financial support for the vetting needs was been donated and our volunteer Dana transported them.

Behind the scenes, Sandy and Rayna did a lot of coordinating with all involved and with the shelter (who was VERY helpful to us). It was a great team effort. We also received additional offers from for fostering and support for these two. Many thanks to all who offered. This one had a happy ending! 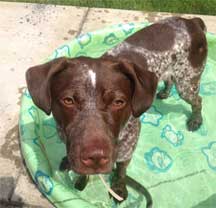 Gerry: The Big Lug
Gerry was our big lug and one of the dogs that was in our foster care the longest. He was pulled from a NYC shelter, at 3.5 years old, where he was dumped by his owner. He’s a larger GSP — a solid 60 lbs. He’s a loving, affectionate boy that would be a lap dog if he could. He’s goofy and quite a character too.

Gerry’s big issue, which is not usually an obstacle for adoption, was that he did not get along with other dogs. For some unknown reason, it was a challenge to adopt him out. But, looking back, Gerry was probably just waiting for the right family. He finally found his forever home and it could not have been more perfect!!!

We were determined and it paid off. We are so happy for him. Thanks to his foster family (the Castles) for their 8 months of homing and working with him and for the sacrifice to their own lives!

They took Gerry through training where he learned basic commands and was especially good with “wait” and “stay.” Gerry even learned to bob for hot dogs in a baby pool! He’s one happy guy now and so is his family.

Jerry: The Old Guy
Imagine, at 12 years old, your family decides they don’t have time for you any more. That is what happened to Jerry. Lucky for him GSP Rescue of NJ was there and found his true forever home for his twilight years.

Older dogs are usually harder to place, but Jerry’s journey with us was destined. We received an application from a family with three kids and a Cocker Spaniel who wanted to add a young GSP to the mix. (crazy right?!) After being approved and thinking about it more, they decided if they were going to rescue, they wanted to help an older dog. As they made their decision, Jerry was surrendered to us!

It was perfect timing and meant to be. Jerry came into rescue on 1/27/13 and was adopted on 2/5/13. The family says they feel like Jerry’s been part of their family forever. And, at 12, he still has tons of energy to play, with Frisbee being his preference. The kids adore him and he has become his mom’s “shadow.”

Here’s a note we got from his mom: “Just wanted to share with you the Facebook post I put up today. I am blown away by the difference one month has made in Jerry’s appearance. He looks like a young boy! Amazing what a whole lotta love and good food can do? Hope this makes your day, it made mine.”

Post:
I wanted to share that one month ago today our family opened their hearts to our newest four legged family member. Jerry is a special boy who has brought great joy to our family. We are celebrating his “13th” birthday today as we only know his birthday is in March. So we decided his anniversary made the perfect day. A big thanks to German Shorthaired Pointer Rescue of NJ and Jennifer, Grace and Jerry we wish you many more wonderful years with us!!! Happy Birthday. 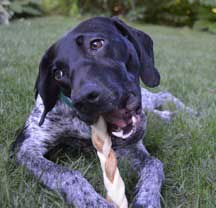 Pepper: Very Peppy!
From Pepper’s Dad:
Pepper is doing great. The first few weeks were hell on earth [because of her energy level!], but she shaped up very nicely. She graduated from puppy obedience class. Our families love her.

She goes to doggy day care 4 times a week which has been great. Sandy,doggy day care is a game-changer. Thank you for that! She is a super athlete and loves to run. Still very birdy.

I might take up hunting actually because of her. She enjoys the NYC dog parks which she gets to everyday. She is friendly with other dogs, but more interested in birds.

She loves her kennel (thank you Rayna) and is perfectly house trained. She rings the bells when she needs to go out (thank you Michelle)….she loves chewing on rawhide and toys. Once in a while, she’ll get a flip flop too. I gotta say, we lucked out. She is an amazingly sweet dog and is just so stunningly beautiful. We cannot walk a block in NYC without someone stopping us and asking, “oh wow, what kind of dog is that?” saying “your dog is so beautiful!”

She is funny and LOVES to be around her mom and dad. She always wants to know where we both are. When we leave, we can see her jumping up 5-6 feet in the air at the front door at my parent’s house.