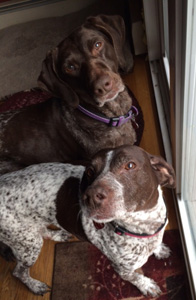 BFF Bonnie- Jerz is more Liver)
As soon as she got off transport, my sister Marin and I named her “Jersey Girl” for her new start on life in the Garden State. Since you never truly know a rescue dogs background or what they endured, especially from a puppy mill, I requested to take the “most adjusted” foster for a hopefully quick turn around, as I already had 4 dogs of my own.

I quickly realized poor Jersey was one of the worst ones affected by her 2 years at the puppy mill.  She was so scared that for the longest time she used to hide under cars, tables, and anywhere she could to get away from people. If you could get close to her (she would never come to you), she would bury her face in your jacket or under your arm and would never make eye contact.  Any noise or movement would send her into “shut down” mode.

A trip to the vet was always a major ordeal, she would need to be tranquilized and it would take 5 people just to do a simple exam because she couldn’t stand to be touched. It was heartbreaking to think of what she endured in MO.

But under all her issues, I knew she was special and was not going to give up on her. After 14 months of fostering her, with very few adoption inquiries, and a lot of work between her and I, I knew she was with me to stay.

Over the last 5 years, she has come such a long way.  While she will never be “normal,” I wouldn’t want her any other way. I love her for how she is and her resilience to overcome her terrible beginning. She still has physical scars, as well as mental scars, which she will most likely never be over, but she has transformed into such a wonderful, beautiful girl despite all that.

She loves the other 5 dogs I have, and became best buddies with Bonnie, my other rescue GSP.  She is a great “hunter,” bringing me tons of “presents” that she catches and is so proud of (gross!)

She is very well trained and loves to go out off leash and run, and has actually  learned to enjoy affection from me and my family including my 7 nieces and nephews.  She even wags her tail now and comes up for attention. She recently started to allow  guests  to pet her and has bonded with her pet sitter, who for the last 4 years couldn’t work for me because of her “quirks” and her chasing them out of the house!

Things happen for a reason they say, and I couldn’t be happier in this case!  (Jersey’s forever home is with GSP Rescue of NJ’s chair, Rayna Regenthal.)

KELLY (with all he 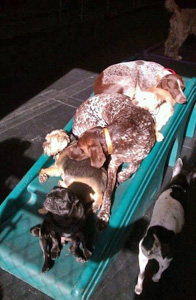 r BFFs)
Kelly is doing very well. Last year she tore her ACL and had replacement surgery and has fully recovered. She has become very friendly but is still timid from her MO days.

She stopped going to daycare on the advice of the animal psychologist who said she doesn’t like leaving the house, particularly if I am present when the dog walkers arrive.

The dog walkers and I take her for daily walks and she loves to run in the yard and chase mice and birds.

She thinks she’s a lapdog even at her size and loves to lay over me at night. I take her to Rehoboth on the weekends and she loves to run on the beach in the sand. I now have six dogs and a cat, four GSPs (three of them rescued from your group), and two terrier mixes that are rescues also.

Phoenix is now 6 years old.  He is the BIGGEST love and has perfected the art of sleeping, curling around ones legs, and “purring” as he falls asleep!  He has diabetes insipidous and has been on treatment since I got him, and doing very well.

He misses my 2 boys who have gone to college, and upon loss of his “brother dog” Marcos (a Lab-Shepherd rescue, died of colon cancer at 11.5 years) in March 2012, we realized how lonely he was and got him another doggie (sister) Lilee (Boxer-Mix) in June of 2012 (also a rescue).

Lilee is a bundle of energy and activity, the opposite of Phoenix, but they love each other and are constantly seen together, with head on body, or paws on paws. Phoenix is in great health and in deep love with the whole family, including my boys who come home frequently to spend time with him and Lilee. Everyone who meets Phoenix loves him. He enjoys many walks a week with not only family, but “adopted” family who come by simply to walk him!