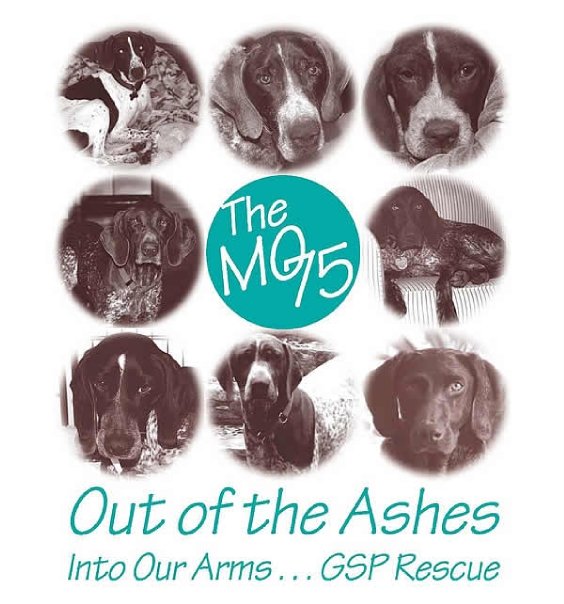 “Abandoned,” “surrendered,” “stray,” “abused,” “neglected,” – these are some of the worst words an animal rescuer hears, and all too often. What could be worse? Puppy mill. These cold reached GSP Rescue’s inbox on a cold February day in 2009, and so began the tale of the “Missouri 75.”

There were 200 dogs involved in the River Valley Kennel Fire in Ozark County, MO. English Springer Spaniels, Boxers, mixed breeds and our beloved GSPs were victims of a fire set by the “kennel’s” owner.  According to a report from KMBC-TV news, “I just went a little nuts today,” the perpetrator Michael Vanderwall told the Ozark County sheriff, according to a probable cause affidavit. Rescue groups had a few other names for Vanderwall and what he did.

As the Department of Agriculture and other authorities were closing in on his heinous practices for breeding and keeping animals, Vanderwall decided the best thing to do was to set fire to his entire property. Midwest PAWS, a licensed MO rescue group that focuses on GSPs, Pointers and Weimereiners, took on the care of all of the GSPs from this disaster.

An early report from a Web site dedicated to the rescue efforts said: “The first round of GSPs arrived on Friday, with the second group arriving on Saturday. The dogs were in need of complete veterinary work-ups, treatment for burns, stitches for open wounds, spay/neuter, treatment for tick infestation, vaccinations, de-worming, etc.”

As time went on and the dogs were evaluated, it was discovered that the dogs were also severely malnourished and dehydrated. Michelle Salyers of Midwest PAWS was our chief point of contact and continually posted updates on the Missouri 75 Web site she created.

No rescue group is equipped to handle this amount of dogs especially at once. There was a national outreach and many rescue groups were involved, including the famous Best Friends of Utah. Some, as with Best Friends, assisted at the scene, others like us offered to foster and adopt out a number of these dogs.

Transport was the most immediate issue, but as of the wee hours of the morning of March 12, seven GSPs were bound for Mid-Atlantic GSP Rescue (4) and GSP NJ (3) rescue. In the early hours on Saturday, March 12 at a hotel parking lot off of Route 80 in Parsippany, the moment finally came. Approximately 10 of our volunteers were on hand to welcome then, including their foster families. All of us who were there considered it an honor seeing these poor creatures at the end of a long journey. 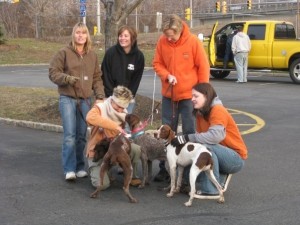 Skinny, scared, but clearly wanting to trust and receive love, the three dogs were aptly named, “Kelly” – in homage to upcoming St. Patrick’s Day, “Jersey” – after her new home, and “Phoenix” – having risen from the ashes.

A lot of time went into training, evaluating, and simply acclimating the these dogs to a life they had never known, and to get them ready for their new forever homes.

Here is how they turned out.
All updates were written by the adopters.